Only the Strong Survive - Jerry Butler (at #39, down from #4 Pop, #1 R&B - written and produced by Gamble & Huff and recorded in Philly, this record launched yet another phase of The Iceman's storied career. Check out those tasty guitar licks and that driving bass line.) 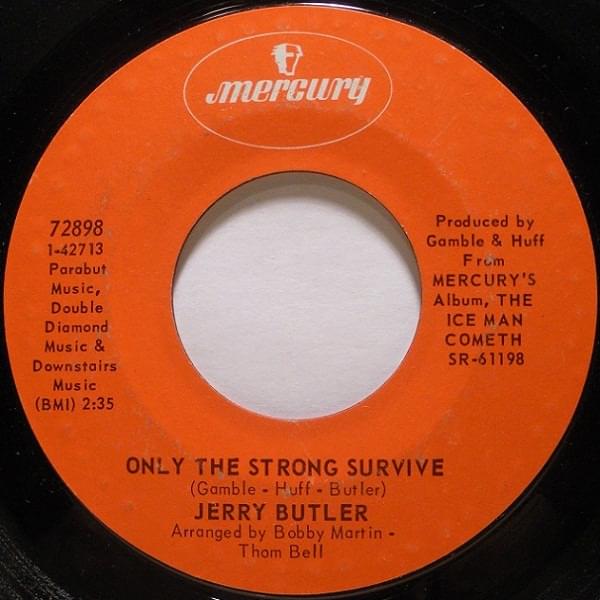 More Today Than Yesterday - Spiral Starecase (at #21, headed to #12 - this one blasted out of car speakers and jukeboxes in the Spring of 1969, featuring a wash of horns and Pat Upton's earnest keening vocals. Columbia Records had yet another hit on its hands!)

I Can't See Myself Losing You - Aretha Franklin (peaking at #28 Pop, #3 R&B - just about everything that Aretha recorded for Atlantic Records turned to gold. This one doesn't get much airplay these days, but it's sublime.) 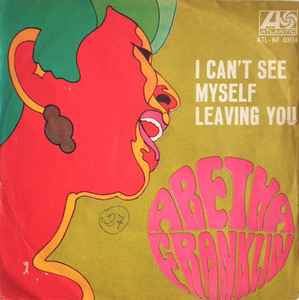 Too Busy Thinking 'Bout My Baby - Marvin Gaye (at #16, headed to #4 Pop, #1 R&B for six weeks - this was Marvin's follow-up to I Heard It Through The Grapevine, and it's much simpler and less intense  -  but it spent six weeks at the top of the R&B charts, and it's a breath of fresh air.)

Get Back - The Beatles (first of five weeks at #1 - thanks to Peter Jackson's eight+ hour documentary, many of us actually saw Paul and the band create this smash hit out of thin air. This was a band at the peak of its powers, even as it was starting to splinter and come apart.) 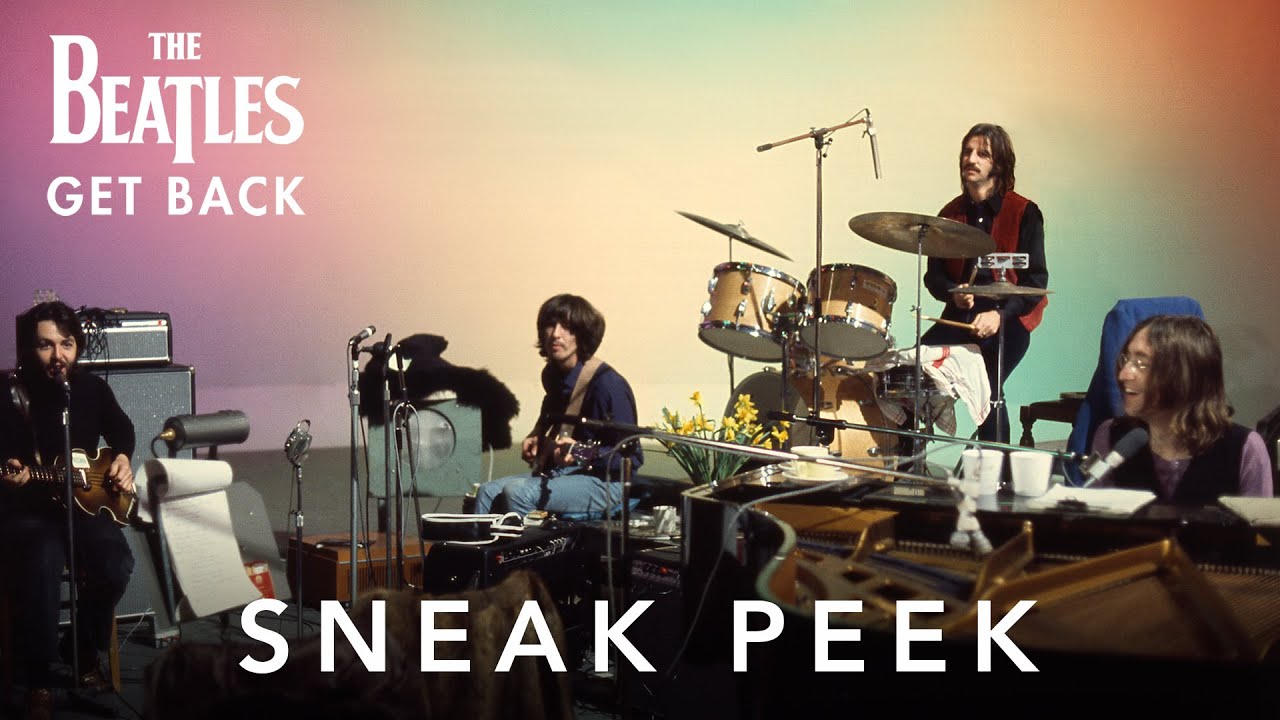 Good Morning Starshine - Oliver (debuting at #83 > #3 - the Off-Broadway "Tribal Rock" musical Hair was the source of multiple chart hits in the Spring and Summer of 1969. This was one that still gets a lot of airplay, and deservedly so.) 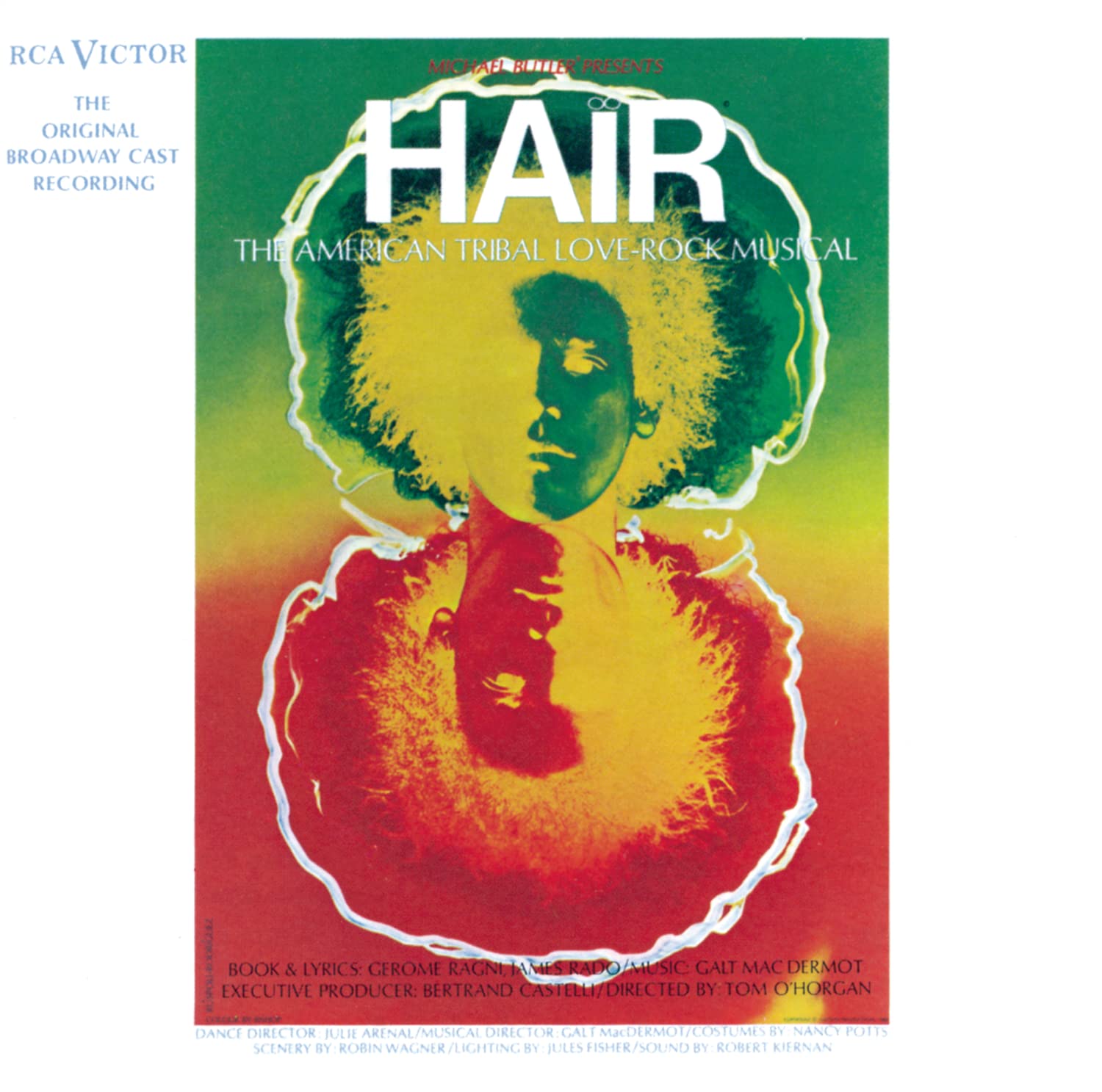 Hawaii Five-O - Ventures (down to #17 from a peak of #4 - thundering drums, some uncharacteristic horns and a driving beat - plus weekly exposure on one of America's most-watched TV shows - helped this record climb to the Top 5. There's speculation that there were actually members of The Wrecking Crew on the recording, because The Ventures were busy touring. Either way...I say "Book 'em, Dan-o!")

It's Your Thing - Isley Brothers (down to #6 from #4 Pop, #1 R&B for four weeks - after years of moderate chart success at a string of labels including RCA, Wand, Atlantic and Motown, the brothers decided to create their own record label: T-Neck Records. They started with this powerhouse number and they never looked back!) 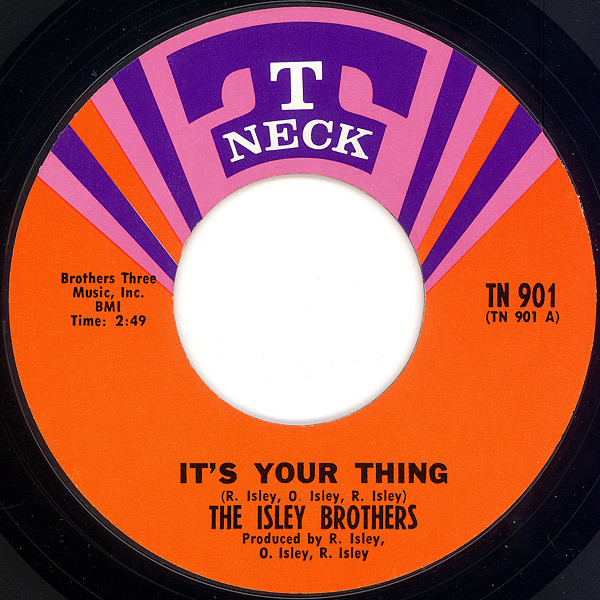 Don't Let the Sun Catch You Crying - Trini Lopez (at #134, headed only to #133 - Trini's heyday was the early-to-mid-Sixties, but he tried to keep up with the times. Modern instrumentation and a snazzy Latin beat couldn't make this one catch on. One listener called in to say that it made him want to clean his ears with industrial cleanser after hearing it.)

Fever - Little Caesar & The Romans (9/61; dnc - tacked onto the flipside of a single that stalled at #101, this one can be considered buried treasure.)

Sally Go 'Round the Roses - Jaynetts (8/63; #2 - this is the first of three "one-hit wonders" that we'll hear in a row tonight. This Bronx girl group had just one charting single. This was it!)

No Good to Cry - Wildweeds (5/67; #88 - these were a bunch of high school kids from the Hartford area and this was a giant hit in Connecticut. Not so much anywhere else, but singer/guitarist/writer Al Anderson would go on to find fame as a member of NRBQ.) 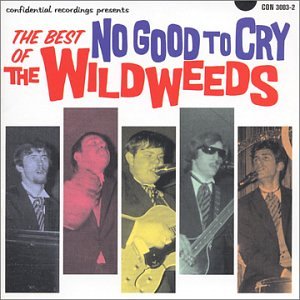 Happy - Blades of Grass (7/67; #87 - this was released on the Jubilee Records label on the same date that a competing version was released by The Sunshine Company. Bigger label? Better promo budget? The latter made it to #50. This one was the only thing ever heard by The Blades of Grass.)

* Stand! - Sly & The Family Stone (peaking on this date at #22 - this was one of SIX singles by the band to rank in the RS500 list. The flipside was I Want To Take You Higher. Their performance of that song at Woodstock four months later would catapult them into the Pop Culture stratosphere.)

Then You Can Tell Me Goodbye - Eddy Arnold (9/68; #84 Pop, #1 C&W - JD Loudermilk wrote it and the Casinos had the bigger Pop hit with it, but this was one of Eddy Arnold's twenty-eight #1 Country hits over the span of forty years.) 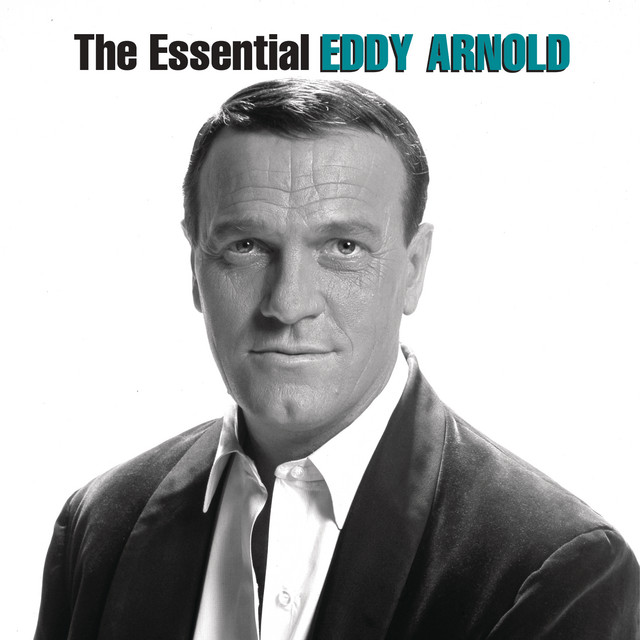 If I Had a Hammer - Trini Lopez (7/63; #3 for three weeks - we heard from Trini a little earlier in the show, but this was him doing what he did best: playing live in front of a partying singalong crowd. This was his first charting hit, and it bypassed Peter, Paul & Mary's version which had topped out at #10 the previous summer.)

I Was There - Lenny Welch (8/65; dnc - this Goffin-King composition was the B-side of a low-charting single, but Lenny was incapable of releasing a bad record.) Up on the Bridge - Chiffons (8/68; dnc - the Girl Group glory days had passed, but these NYC kids continued to release singles on the Laurie Records label and this one should've garnered more attention.)

Take a Giant Step - Rising Sons (1966; NR - Columbia signed this young super group shortly after signing The Byrds. That's young Taj Mahal on guitar and vocals and young Ry Cooder on slide guitar. Both bands were tearing up the LA club scene, but Columbia had no clue how to promote this band. This track would remain in the can for nearly thirty years.)

Soulful Strut - Young-Holt Unlimited (11/68; #3 - drummer Red Holt and bassist Eldee Young had played behind Ramsey Lewis for years. They finally decided to branch out. This was the pinnacle of their success under their own names.)

Roundabout (single edit) - Yes (3/72; #12 - this was the classic Yes lineup, and their only Top 20 hit as a quintet was this 3:25 edit of their 8+ minute album track. Happy birthday to birthday bandmates drummer Bill Bruford and keyboard wizard Rick Wakeman.) 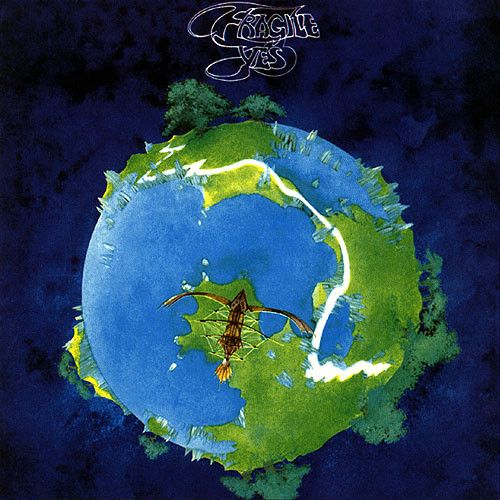 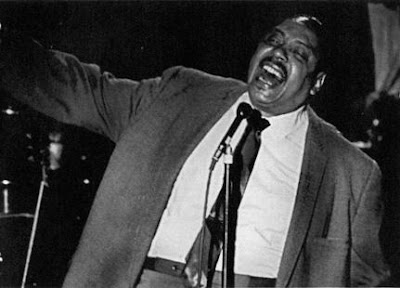 45 Corner:  Bang, Bang (My Baby Shot Me Down) - Cher (3/66; #2 - while Sonny & Cher were successfully cutting hit records for the Atco label, Cher signed a solo deal with Imperial Records and had a string of hits under her own name. This was her biggest for the label, and all CD versions are a horrible stereo mix with instruments on one side and Cher on the other. Tonight we hear the  scratchy but superior mono 45.)

Six artists from this week's birthday calendar appeared on this week's spotlight chart. We've already heard from Trini Lopez and Ronald Isley in Hour One. Here come four more from late May 1969!

Pinball Wizard - The Who (5/69 - peaking at #19 and featuring the writing, harmony vocals and blistering guitar licks of mastermind Pete Townshend. His "rock opera" Tommy would yield three Top Forty singles. This was the most successful. Here they are just a year later performing it in front of a crowd of 600,000.)

Feeling Alright - Joe Cocker (at #121, headed to #69 - A&M Records would re-release this single two years later and it would reach #23 here in the States. Dave Mason wrote it and recorded it with Traffic back in 1968.)

* Hair - The Cowsills (down to #4 after two weeks at #2 - the "Tribal Rock musical" Hair yielded a bunch of radio hits for assorted artists. This one is notable in the career of young Susan Cowsill when it features her solo line "and spaghetti'd!" This 2018 performance shows that they've still got "it" and that Susan has matured into a fabulous entertainer.)

Seattle - Perry Como (at #42, headed to #38 - Perry had something of a comeback in the late Sixtes/early Seventies. This was the opening theme song for the popular TV series Here Come the Brides, which helped sell a slew of singles.) 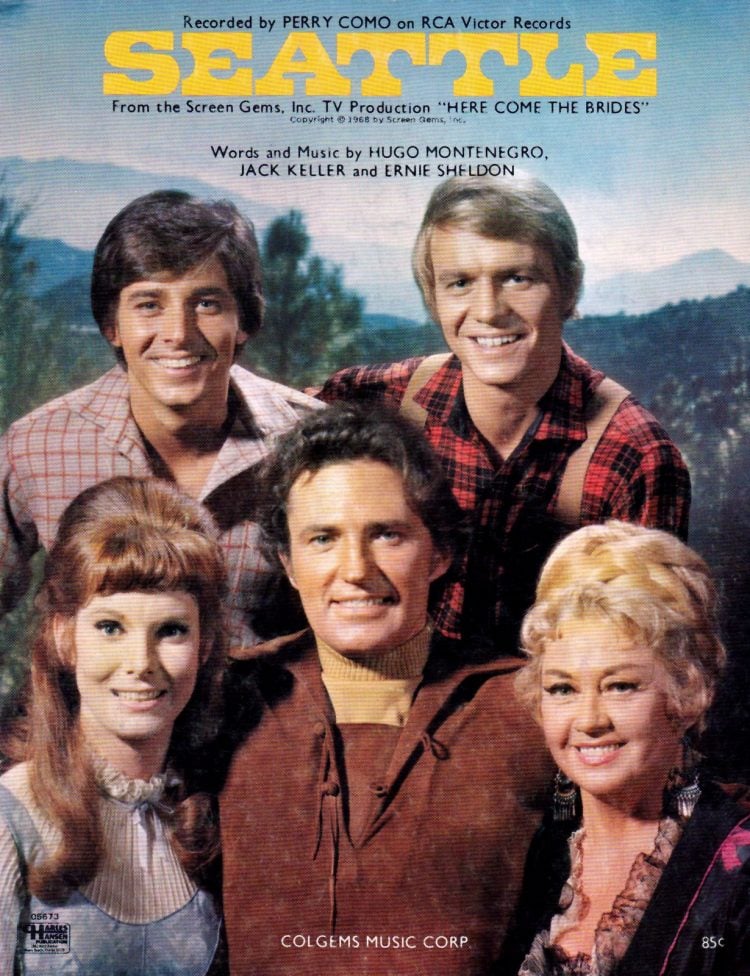 * Rock 'n' Roll Heaven - Righteous Brothers (5/74; #3 for two weeks - going out at the request of Scottie. This song mentions Jimi and Janis and Jim Morrison and "The Immortal Jim Croce," as well as Otis Redding. The list has grown exponentially since 1974.)

Work to Do - Isley Brothers (11/72; #51 Pop, #11 R&B - birthday celebrant Ronald Isley and his brothers have a very deep catalog spanning at least 50 years. This song was also adopted by The Average White Band, who put it on the B-side of their biggest hit Pick Up the Pieces.)

Boogie Nights - Heatwave (7/77; #2 for two weeks - they were a versatile band: funky dance band one minute, smooth balladeers the next. I partly played them tonight because we're experiencing our first heat wave of the season. Brace yourselves....)

Fire - Pointer Sisters (11/78; #2 - here's another #2 record from the late Seventies, this one from the pen of Bruce Springsteen himself. Check them out two years later on a hot summer's night. From Oakland, California: I give you The Pointer Sisters!)

Laughter In the Rain - Neil Sedaka (2/75; #1 - Neil got his start in high school with a group they called The Tokens. Yes, those Tokens! He then went to the Brill Building and wrote a string of Pop hits that dried up with the arrival of the British Invasion. At that point, he should've been washed up  -  but he'd mount a vigorous comeback in the mid-Seventies, and this is just one example.)

Rain - The Beatles (6/66; #23 - this one was the B-side of Paperback Writer, but what a B-side: it's a brilliant record that features some of Ringo's toughest drumming, Paul's best bass work and one of the first uses of backwards guitar trickery. Rolling Stone ranks it at #469 in their RS500.)

Friends - Elton John (3/71; #34 - this was Elton's foray into film scoring, and it's a mostly-forgotten gem that deserves a second listen.)

Every Day I Have to Cry - Steve Alaimo (1/63; #46 - Arthur Alexander was a prolific singer and writer with a profound influence on artists ranging from the Rolling Stones and Beatles to America's Gentrys and Steve Alaimo, both of whom recorded this song of his. Tonight we'll hear two versions.)

Every Day I Have to Cry - Arthur Alexander (9/75; #45 - years after other people sold a bunch of records, Arthur Alexander decided to record his own version. He may have been late to the party, but boy, could he deliver!) 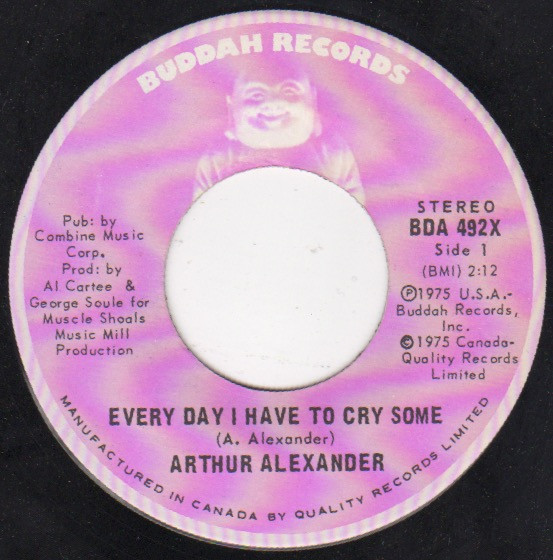 Never Comes the Day - Moody Blues (bubbling under at #115, headed to #91 - this one would slowly bubble around beneath the surface and finally chart in late June, where it would take another four weeks to reach a lowly #91. At this point they were getting lots of play on FM radio, but this is a pretty cool way to end the show.)

Congratulations to Kevin from Ithaca, for winning a a pair of tickets to see Modest Mouse at Beak & Skiff Apple Orchards!

Host Next Week (5/28/22):  Jan Hunsinger with a spotlight TBD as he celebrates six years on the Remnants team!

Thanks again to our sponsors Island Health & Fitness and Rasa Spa for their support every week!
Posted by Rockin' Remnants at 8:32 AM No comments: