Gearing up for a three-hour radio fun fest (6-9 p.m.). Ronnie Bright? Anita Darian? Dave Sommerville? Not really household names, but you've heard their voices a million times. Tonight we peel back the curtain to reveal more of the unacknowledged heroes behind the hits. No cover, and room for everybody! 93.5 FM or streaming at wvbr.com.

Q - Johnny Cymbal (see Mr. Bassman below) went on to have another hit under another name. What was it and who was he?


Dead End Street - Lou Rawls (4/67; #29 Pop, #3 R&B - this biographical tale of life in the Chicago ghetto opens with a spoken monologue. Cult hero Sixto Rodriguez opened last night's State Theater show with his own interpretation of this one.)

I Wonder - Rodriguez (1970; dnc - released on Motown Records and instantly forgotten here in America, this became the soundtrack for the fight against Apartheid in South Africa, where Rodriguez became a legendary musical hero. The amazing story is chronicled in the film Searching for Sugar Man. See the trailer here.)

98.6 - Keith (12/66; #7 - this young Philadelphia singer had his biggest hit with help from NYC's Tokens, who doubled as producers and writers and back-up singers)

Hello Stranger - Barbara Lewis (5/63; #3 Pop, #1 R&B for two weeks - this was her biggest hit and part of its charm was the vocal support of Chicago group The Dells.)


* Mr. Bassman - Johnny Cymbal (2/63; #16 - this novelty record was credited to Johnny Cymbal, but the real star of the show was the Bass man - who turned out to be an uncredited Ronnie Bright, bass singer for The Valentines. Turn up the bass and let's give the man his due.)

* The Lion Sleeps Tonight - Tokens (12/61; #1 for three weeks - this adaptation of an African folk song featured the soaring harmonies of The Tokens, but the REAL "soaring" voice belonged to Anita Darian, who sang with the NY Philharmonic and did a bunch of session work in NYC, and who lent her voice to this big hit.) 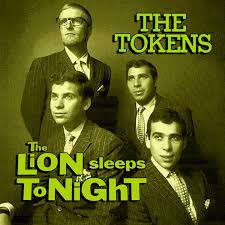 Mr. Sandman - Chordettes (11/54; #1 - the smooth and tight harmonies of this group were inspired by the barbershop harmony sounds of their home in Sheboygan, WI. The male voice of "Mr. Sandman" was none other than that of label owner and conductor Archie Bleyer. Who knew???) 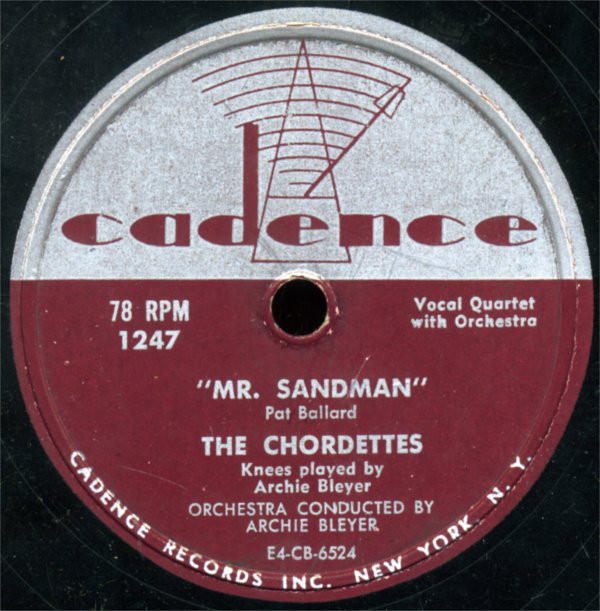 Ain't No Way - Aretha Franklin (4/68; #16 Pop, #9 R&B - this one came from the pen of Aretha's sister Carolyn, who also sang on it. The soaring high notes belonged to session singer Cissy Houston, who was leader of Atlantic Records' Sweet Inspirations. She would later give birth to a baby girl and name her "Whitney.")

Are You Lonesome Tonight (Live) - Elvis Presley (1969; dnc - this is the famous "laughing version" of Elvis' big #1 classic. The band continues, but the real hero is the uncredited back-up singer who just won't be derailed. Legend has it that it was the veteran Cissy Houston.)

Part of the Plan - Dan Fogelberg (2/75; #31 - the opening track of his Souvenirs LP, which features the record's producer Joe Walsh on lead guitar and Dan's friend Graham Nash on harmony vocals.)

You've Got to Hide Your Love Away - The Silkie (10/65; #10 - the Beatles had so many great songs that some of them just couldn't be released as singles. In this case, John & Paul offered to help make this one a hit  -  it's Paul's opening guitar lick that kicks things off.)

Badge - Cream (4/69; #60 - Eric Clapton was doing some songwriting with his friend George Harrison when they came up with this one. Eric looked across the table and thought his friend had written "Badge" on the paper, but it was really the word "bridge." The title stuck.)

Day After Day - Badfinger (12/71; #4 - George Harrison was in the producer's chair for this one and decided to add his slide guitar to that of Pete Ham. It happens that the next studio was being used by George's friend Leon Russell. George got Leon to come next door and lay down the piano track on this recording!)

House of the Rising Sun - Animals (9/64; #1 for three weeks - their first charting single was this iconic classic. M-G-M edited it down to under three minutes, but tonight you hear it in its full first-time stereo  glory featuring Alan Price's remarkable organ work.)

A Man and A Woman - Tamiko Jones & Herbie Mann (11/66; #88 - a sultry combination of textures captured the swingin' romantic sounds of the French film of the same name.) I Love How You Love Me - Bobby Vinton (11/68; #9 - this very tasty cover of the Paris Sisters' classic was produced by NYC producer Billy Sherrill and featured some of New York's finest session players.)


She'd Rather Be With Me - The Turtles (5/67; #3 - hot on the heels of their #1 smash Happy Together, The Turtles kept churning out peppy Pop confections. This one features the dual tambourine playing of Mark "Flo" Volman  -  "Flo" being short for "Phlourescent Leech.")


Stay Awhile - Dusty Springfield (3/64; #38 - after her start as a Folkie with her brother Tom in The Springfields, Dusty had a string of great "Girl Group" hits before morphing into a classic Soul balladeer. This one features the thundering drumming of British session man Bobby Graham.)


Darlin' - Paul Davis (5/78; #51 - this Mississippi native had a nice string of hits, but is mostly remembered for I Go Crazy, which spent an unparalleled FORTY WEEKS on the Pop chart. This tasty cover of the Beach Boys tune features vocal support from Susan Collins.)


Try a Little Tenderness - Otis Redding (12/66; #25 Pop, #4 R&B - one of Otis' most classic recordings here, featuring the Memphis Horns and the musical backing of Booker T & The MGs, who played on all of the Stax hits.) 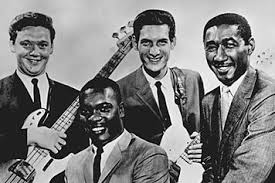 Hitch It to The Horse - The Fantastic Johnny C (7/68; #34 Pop, #25 R&B - The James Boys were releasing a low-charting instrumental called The Mule. This is that same record with some crowd noises added and Johnny C's shouting and testifying vocals. Johnny C won the chart race; The James Boys would eventually morph into MFSB.)


(Your Love Keeps Lifting Me) Higher & Higher - Jackie Wilson (8/67; #6 Pop, #1 R&B - this is one of Jackie's greatest performances, inspired no doubt by the uncredited backing of Motown's "Funk Brothers," who were known to moonlight on a number of records, much to the dismay of their boss Berry Gordy.)

To Sir With Love - Lulu (10/67; #1 for five weeks - shortly after Wayne Fontana left the Mindbenders to become a star, the group soared to near the top of the charts with A Groovy Kind of Love. A year later they were hired to back Lulu up in a movie starring Sidney Poitier  -  and ended up with this monster of a hit here in the States. Note: it was never released as a single in the UK, and the band was never credited on the record label - but they did get their name on the movie poster.)

* It Might As Well Rain Until September - Carole King (8/62; #22 - before becoming one of the most prolific songwriters of the era, Carole King took a crack at a recording career. As with all of her productions, she played piano on this one.)

As Long As There Is L-O-V-E Love - Jimmy Ruffin (1/66; #120 Pop, dnc R&B - David Ruffin's older brother had been bouncing around at Motown for a while, but had a hard time getting quality material. That changed with this Smokey Robinson tune, but it didn't turn out to be the hit it deserved to be.) 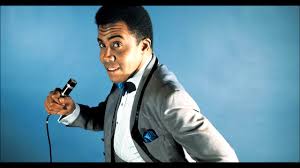 
Rock 'n' Roll Lullabye - BJ Thomas (2/72; #15 - Barry Mann & Cynthia Weill wrote it, and the plan was to have an all-star cast bring it to life. Duane Eddy played the twangy guitar, Darlene Love & The Blossoms provided the background vocals and the Beach Boys were scheduled to add a wall of harmony. When they failed to show up, The Diamonds' Dave Sommerville volunteered to multi-track "Beach Boys-like harmonies." This is the result!)

Wishing You Were Here - Chicago (10/74; #11 - in this case, The Beach Boys DID show up  -  in the form of Carl Wilson, Dennis Wilson and Al Jardine. Their smooth harmonies combined with the sounds of the shore helped propel this song to great heights.)

It's a Shame - Spinners (7/70; #14 Pop, #4 R&B - co-writer Stevie Wonder also plays the drums on this dance floor favorite. The Spinners would soon leave the Motown family for Atlantic Records and achieve even greater success there.)

Lowdown - Boz Scaggs (7/76; #3 - this single won the Grammy for R&B Song of The Year. Louie Shelton plays the blistering guitar that runs through - and closes - the record.)


Walk On By - Dionne Warwick (4/64; #4 - this is one Dionne's signature singles. The chunky guitar that helps build emotional tension throughout the record comes to you courtesy of session player Louie Shelton. He's in the spotlight during this portion of the show!)

I Want You Back - Jackson 5 (1/70; #1` Pop, #1 R&B for four weeks - one of the greatest debut singles in the history of recorded music featured the sizzling guitar work of Louie Shelton. Watch the video  -  please!)

(We'll Be) United - Peaches & Herb (6/66; #40 Pop, #11 R&B - The Intruders released this song at about the same time as "the Sweethearts of Soul" did, cutting into each others' sales and chart success. Two years later the backing musicians would chart with it as an instrumental under the name The Music Makers. They were, of course, The James Boys.) So You Wanna Be a Rock 'n' Roll Star - Byrds (1/67; #29 - disillusioned with the industry, especially in light of the Monkees' "overnight" success, Roger McGuinn wrote this song. The screaming girls were recorded in England at a Byrds show, and the searing trumpet that runs throughout comes to you courtesy of the late Hugh Masekela.)

Long Ago and Far Away - James Taylor (10/71; #31 - this short and sweet ballad features the backing vocals of a young Canadian singer/songwriter with long hair, big teeth and unrivaled brilliance. Yes, it's Joni Mitchell.)

45 Corner:  Redneck Friend - Jackson Browne (9/73; #85 - this was the only charting single from his For Everyman LP, and featured guest musicians Glen Frey of the Eagles on vocals and a rollicking piano player called "Rockaday Johnnie" on keys. You may know him better as Elton John.)

To close the show we shine a spotlight on Bill Burkette, lead singer and charter member of the group called The Vogues. He passed away on March 1st of this year and was still performing to the very end. 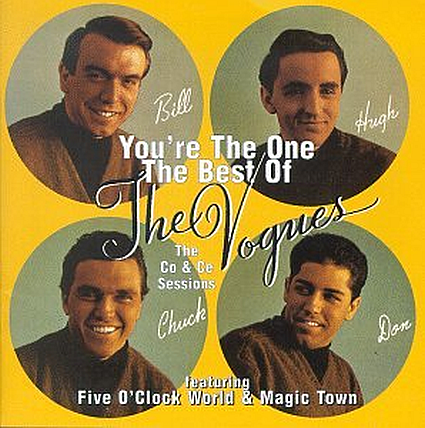 The Land of Milk and Honey - Vogues (6/66; #29 - The Vogues started as a rocking vocal group from Turtle Creek, PA. They recorded for the small Co & Ce Records label before being signed to Reprise Records where they...) 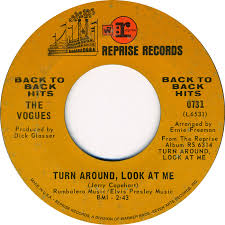 Turn Around, Look At Me - Vogues (8/68; #7 - ...were re-cast as a smooth vocal group singing covers of classic ballads. This one was originally a hit for Glen Campbell, but they totally claimed it as their own!)


Q - Johnny Cymbal (see Mr. Bassman below) went on to have another hit under another name. What was it and who was he?

A - "Cinnamon" was the song and Derek was the name

Congratulations to Tom from Freeport, for correctly answering the question and winning bragging rights!

Posted by Rockin' Remnants at 8:30 AM No comments: